New clues suggest people reached the Americas around 30,000 years ago 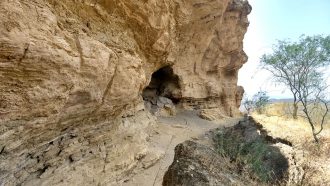 Humans may have inhabited what’s now southern Mexico surprisingly early, between 33,448 and 28,279 years ago, researchers say.

The latest evidence comes from animal bones that biological anthropologist and archaeologist Andrew Somerville and two Mexican colleagues found stored in a Mexico City lab. The bones had been excavated in the 1960s at a rock-shelter called Coxcatlan Cave.

Higher sediment layers yielded clearer examples of stone tools and other remnants of human activity dating to nearly 9,900 years ago.  Somerville, of  Iowa State University in Ames, initially suspected that rabbit bones from the deepest sediment were perhaps around 12,000 years old. But analyses revealed they were much older, hinting humans were living in the cave roughly 30,000 years ago.

Somerville will next determine whether other animal bones from the ancient sediment display butchery marks, breaks where marrow was removed or burned patches from cooking. He also wants to locate and study possible stone tools from that same sediment that may be stored in the same lab.

Based on additional radiocarbon dates and comparisons with stone-tool finds from other Mexican sites, Somerville suspects that a separate occupation of Coxcatlan Cave occurred between 13,500 and 9,900 years ago. Regional food and water sources may have dwindled when the last Ice Age peaked between 26,000 and 19,000 years ago, causing the earliest settlers to leave and delaying further occupations  until conditions improved, Somerville speculates.